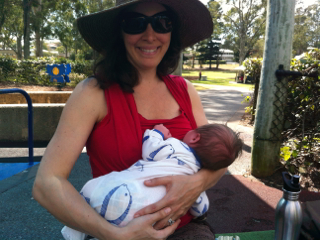 This is my favourite discreet breastfeeding top - it looks like I'm just cuddling my 2 week old!

I remember my first time breastfeeding in public. I was really nervous. My little guy was only a few weeks old, and definitely hadn't got his latch right yet. He was still taking a while to latch on and I was trying to cover myself up with a wrap. So awkward! Check out my nursing in public video for my solution to my initial problem!

The wrap meant I couldn't see what I was doing, it was summer so it was hot for both me and him, I was nervous so my let down was a little slow.....

It was so challenging initially too because I'd spent all those years covering up my breasts, and suddenly I hadto get used to the fact that it's okay and natural to have a small amount of exposure.

Anyway, we got a lot better at it as we went along and I'd like to share a few tips on how I made it easier!

Tip Number 1:
Soft Bras are Easier than Shaped/Padded Ones

The market for breastfeeding bras is huge now and there is a great range of really pretty styles. Unfortunately when you're breastfeeding in public though you want the most discreet one possible!

The older style soft types are much easier to use when you're out and about because they fold in under your breast better.

My first attempt with a lovelyshaped bra was somewhat disastrous! The padding meant the bra kept trying to come back to shape and my nipple kept getting covered before my newborn could latch!

I found the soft bras would stay under my breast really easily so I didn't have to worry about holding my bra in place while moving my baby to the right spot and keeping his hands out of the way (because all newborns have that instinctive reflex where their little hands get up and in the way - it's useful for baby led attachment, but hard work when you're breastfeeding in public!)

Tip Number 2:
Breastfeeding Clothes Which Cover the Top of Your Breast Make You Feel Less Exposed

When I first went onto maternity leave my husband and I were a littlebit nervous about money. I think it's fairly common when you suddenly lose part of your family income. Anyway this made me a little bit tentative about spending much money on maternity and breastfeeding clothes. After all, you're not using them for very long!

Anyway, I struggled on with a few cheaper purchases initially and then we got a bit comfortable and I splashed out and got a better breastfeeding top.

Oh my, the difference it made! Suddenly, instead of folding down the top of my singlet, I was pulling up a flap of material. I felt so much less exposed! People walking by wouldn't even notice I was breastfeeding , it just looked like my little guy was asleep!

Tip number 3:
Practice a Discreet Latch On at Home

After a while Igot very good at being very discreet while breastfeeding in public. I'd get my bra cup in the right spot first (without moving my top), then I'd get my baby in line and fairly much in position.

Now you're baby's head will cover most of the skin you expose so if you keep them reasonably close to your nipple this helps.

Next I'duse my practiced hand movement (which I'd perfected at home) of moving my top with my thumb while keeping the rest of my hand over my nipple.

I'd then wait til my baby was about to open his mouth really wide and move my hand out of the way. It did take a while to get used to when he was going to be ready to latch easily, but they get really quick at it by 2 months, so it's only those first few weeks where you're a bit slow.

If All Else Fails, Use A Cover

I think it's really sad that our society doesn't make it easy for us to breastfeed in public without feeling exposed or rude or embarrassed, or one of the other myriad of feelings that we end up going through, and after my first attempt with the wrap I actually stopped using a cover.

If you're too body self conscious or in a community that really doesn't tolerate breastfeeding in public though then I really feel a breastfeeding cover is the next best thing.

There's a little bit of stiffening in the top of them that helps hold the material off your baby's face and makes it easier to see what you are doing.