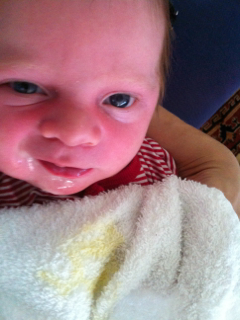 Breastfeeding day 10 sees my poor little man not coping with the amount of milk I'm making.  I can hear him gulping really quickly when he first starts feeding and then he'll pull off for a little break.

The huge amount of milk was also making him swallow air too, so there's a whole lot of burping that needs to happen as well as the vomiting to get rid of the extra milk.  He also seems to vomit when his abdomen contracts a bit to poo......  It just means we're getting lots of regurgitated milk everywhere!!

Being one of those kind of people who really notice smells a lot I'm now associating vomited milk with my little guy, so there's this random connection between vomit and this warm fuzzy feeling about my baby!! Haha!!  Kinda random!!

Anyway, back to what i decided to do.

The poor little guy wasn't sleeping much because he kept waking himself up vomiting or burping and so by the end of the day he's totally overtired, not even latching on well, and then gagging while feeding, and still wanting to breastfeed to sleep......  Obviously not a great thing for a bubba who already has too much milk in his belly.

Awkward for me because there's a very cranky bubba who just wants to suck to sleep and I can't really breastfeed him to sleep so I decide to try a dummy/pacifier......

I'm really not into them much, but they worked really well for my first little guy so we decided to give it a go again.

He sort of takes it, but sort of doesn't, but at least he settles a bit.

The other thing I decide to try is some block feeding.  So what that means is me only offering one side for 4 hours, allowing him to feed as often as he wants to still.  Then after 4 hours offering the other side. (WARNING - DO NOT DO THIS UNLESS YOU HAVE TOO MUCH MILK as it really decreases your supply)

It does seem to work well, but the first feed on the new side it's like I'm drowning him.... Poor little fellow!

To help this I decide to pump a little before he starts the feed at night.

It does seem to help a bit.

The other thing that really helps is a swaddle wrap.  I can't believe I didn't know about these with my first baby.  Zipping him into something that restrains his arms just that little bit is excellent, rather than a muslin wrap not staying on very well!!