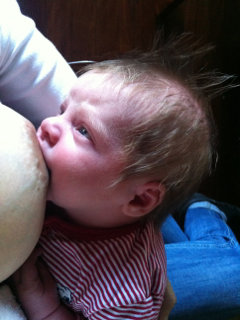 Breastfeeding day 11....... quite a challenging day! I've been struggling with a baby who is getting too much milk and waking him up so I've started block feeding (I'm doing one side for four hours.  He can feed as frequently as he wants to but isn't getting quite as much milk.) It's starting to decrease my supply and he's starting to vomit less but I'm still hesitant to breastfeed him to sleep.

So we try a dummy again (I tried it the night before and he sort seemed interested). Well, what a disaster! He just wouldn't take it and the poor little fellow was so overtired and upset, but I persevered and finally got him to settle without a breastfeed.

There are certainly times he won't settle, but after a while it becomes obvious that there's a poo on the way when that happens.  And oh man, is that annoying at night!!!

Poos at night are annoying anyway, but when you've finally got a baby settled and then they poo five minutes later and you have to start the whole process over again it takes a long time.

He definitely spews more after his breastfeed too if there's a poo on the way. I think it must be because there's too much pressure in his belly as well as him overfilling!  It's so hard when all he wants to do is breastfeed!

I know htere's still heaps of milk getting in too as he's really wetting his nappies more.  We use cloth nappies and man is he going through them now!  I've been able to reuse some of my first son's nappies but I think I'll have to get some new ones because they aren't as absorbent as they used to be!