Colostrum - Liquid Gold, but Nipple Pain Gets Me Down 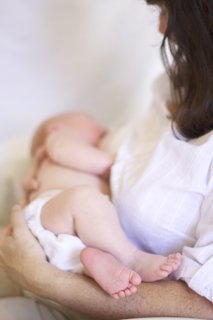 After getting a little more sleep I suddenly notice what a crazy color colostrum is. No wonder it's called liquid gold, it's a clay yellow! It's hard to believe that my body can produce something this color, it almost looks like something manufactured with lots of colorings put into it!

My right nipple is getting extremely sore now, and he's feeding every two hours or so, so there's no break for me to have any real healing time. There are little blisters on the nipple which increase in size during the feed, going back down a bit between feeds. My midwife has said that if you get the baby attached properly there won't be any pain even when you are still healing because the nipple isn't actually getting stimulated against the top of their little mouths any more, but sitting at the back, not touching anything, with just the areola being squeezed.

I'm having a little trouble seeing how this will actually change at the moment, and it's really starting to get me on the edge of depression, with me crying during the night time feeds particularly, and only just holding it together during the day. I can really see how people would give up at this point. Certainly if there was formula in the cupboard at this point I would consider getting it out and making it up for him, just to give myself a break.

To make matters worse the stitches in my perineum are really sore. I can't really sit or stand for much more than a few minutes without being in pain. My midwife suggested I feed lying on the bed, but I have a lot of trouble getting my baby attached that way and feel like it causes me more nipple trauma. I decide to alternate between lying down and sitting for feeds, so at least one area is getting a break each time!

Oh man, I was only just talking about this the other day to a friend who's going through the same thing all over again.

Just to talk about colostrum a little more, it's this most amazing stuff that causes your baby to get rid of all the meconium (it's one of the best laxatives ever, haha).  It's also packed full of antibodies and is the most amazing gift we can give our bubbas. It's so well regarded in fact that there are supplement companies out there that sell colostrum (cow of course) and if you have an excess of it and the nurses notice that in hospital they'll ask you to express some for the premmie babies (my mum actually helped out twins back in the early eighties when I was born - such an amazing gift to give another person's baby too!)

Anyway, back to the time of nipple pain. Oh man, it was probably the hardest bit about becoming a new parent (the next hardest bit was getting him to settle - no one really told us what to do for that..... anyway)

So, clearly when you look at this story I was well on the way to nipple trauma and mastitis. In fact it's one of the main reasons I set up this site - even though I had a fair amount of knowledge about breastfeeding prior to starting I still had some poor advice which caused me lots of problems.

So, How Would I Handle it Differently Now?

For starters, I always recommend anyone who is having problems with nipple pain to see a lactation consultant.  Now you'll notice that I was seeing one because my midwife was trained, however it didn't really help me so My first piece of advice -

Another thing I tried was a different position - lying on my side, but I've found that newborns aren't very good at attaching this way so I'd recommend

Finally, something I've only just come to realise, it's fine to be feeding from both breasts but plenty of people will quite successfully only feed from one side at each feed (which also helps your baby get more hind milk and less pain from gas and bloating) so

If all else fails though and your nipples are just too blistered to continue,

My doctor friend also said that if your nipples don't heal up pretty quickly while you rest them and use a pump, get into a doctor and make sure there isn't an infection.