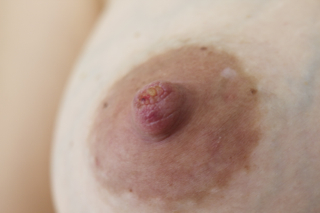 It's breastfeeding day 5 and I'm in a lot of pain.  My blood blisters look awful and a re quite sore between feeds now too.  Thankfully though I listened to my gut instinct and got some help from a lactation consultant.

My midwife had said the pain I was experiencing sounded fairly normal, but this time I didn't listen fully (though I wish I had called my LC earlier in the week, but at least I called her!).  I really think that the blisters which were forming on day 2 were the first sign I should have called, bt hopefully my experience will help you not to make the same mistake!

My poor little man's sleeping is a bit disturbed today because of the LC visit, but it's well worth it.

Strangely enough she tells me things I already know about how Ive got him positioned to far across my body (check out my video showing you how I fixed his breastfeeding positioning), but I hadn't quite grasped the concept fully.  It's one of those things that you can know some information, but putting it into practice is another thing altogether!

She did tell me to do so hand expressing to get some milk onto the nipple before my little guy latched which I hadn't been doing, she also recommended scooping my breast into his mouth a bit during the feed - these were useful to a degree but I really feel that the positioning advice was the most breaks through in getting me pain free (which only took two days!!  My nipples were pretty much fully healed in 3 days!!)

After the visit he had a very settled afternoon sleep but was incredibly unsettled between 8pm and 1am.  He's vomiting so much that I decide to sleep with him on my chest while I recline on lots of pillows so that he's more upright and we both get a little sleep.

It works a charm, and he sleeps for 5 hours!!!!  I wake up with incredibly sore engorged breasts though!