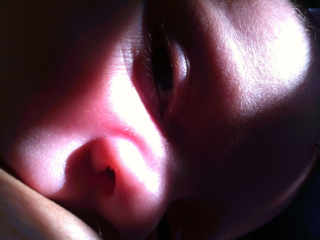 Well, by day 6 I'm getting better at the whole co-sleeping thing. Having my little man in the bassinet next to the bed, though he's loud at times, is so much easier than worrying how he's going in another room. I'm also getting better with bed sharing at the 5am feed, only dozing really lightly now so I'm not so worried about rolling onto him.

With the nipple pain and breast tenderness still being a problem I've been wandering around near naked most of the time just to allow the scabs to heal a bit. They are looking quite dark now and much better for the air. My husband's dad wants to come and stay the night though and I'm really nervous about it. I'm certainly not comfortable with walking around without a bra or top on in front of him so I decided to wear a bra to bed while he's here.

In actual fact it helps out from a leakage point of view anyway, as I can contain the milk in the breast pad. The feeds have spread out to 2-3 hourly now which means there's been a fair bit of leaking. It does make me a little nervous that the nipples will remain moist overnight, but I will deal with that if it does become a problem.

After reading up about co-sleeping ( James McKenna's papers are very helpful) I can see that having my little man in the room is a good thing for him, but I've also noticed that I didn't get the problems with very engorged painful breasts which if he wasn't in our room and feeding more often I might have.

Looking Back at the Newborn Time
2 Years Down the Track

I remember thinking that co-sleeping was a very hippy thing to do but after I researched it more I realised that the majority of people do it and don't realize they are!

Co-sleeping actually means to have your baby within arms reach of where you are sleeping, so a bassinet next to the bed is co-sleeping.

Really at the time I don't think I would have coped well without my little guy right next to me. There were so many nights where he just wouldn't go to sleep without me rocking the bassinet a little, I can't imagine being out of bed doing that!

I found too that bed sharing wasn't so bad if I wasn't worried about him being right next to me.  I was a bit naughty and put him between my husband and myself (because I was worried about him rolling off the bed by accident) but really, if my husband had been more open to the whole bed sharing thing, getting a guard rail (which is really useful for stopping toddlers falling out of their "big boy's bed" too) would have been much easier, that way we both would have been less worried.

In general I think the whole co-sleeping thing has been quite maligned in the media, but there are definite perks. I could always hear my baby breathing - absolutely no need for one of those mattress underlays that ring an alarm if your baby stops breathing - much less stressful!

Transitioning from the Bassinet to the Cot

I think it was very easy for us transitioning from the bassinet to the cot because we always put him down to sleep in his cot for all of his day sleeps and also the first part of his night sleep. Then as we went to bed we'd transition him into the bassinet (he never woke up while being moved around!). So one day we just didn't move him out.  He didn't even notice!!

Other friends who have bed shared use a mattress on the floor and lie next to their baby/toddler while they fall asleep and then go to their own bed when ready to go to sleep themselves.