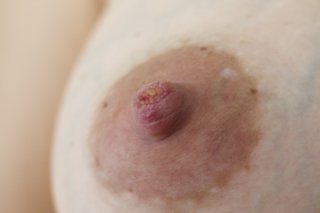 When you hear that you might get cracked nipples or blisters from breastfeeding you don't really realise just how painful it can be. At the end of week one I had a blister burst during a feed and cover my little man's mouth with blood (which was extremely distressing for me, as well as painful) and I thought after that happened that everything was starting to improve, but now I realise the importance of maintaining vigilance with a good latch.

"So breastfeeding's not meant to hurt. Well then I'm not doing it right." This is what I was thinking to myself during this time, which of course was not helping me at all. I was so glad I'd read and watched so much about breastfeeding and the benefits of it before starting though because I would definitely not have got through those first few weeks without that knowledge. I'd decided not to have any formula in the house so that it would only be a possibility if things got really desperate and we went out to get some. I think it would have been very easy to just give in to giving a bottle early on to stop my pain but I'm glad I persevered.

So the cracked nipples were hurting at each feed, particularly with the first few minutes after the latch on (looking back now I didn't really stop having pain during the feeds till he was one month old, but it diminished significantly after that second week). Of course being tired was making it worse, but I definitely found that if I was in a positive frame of mind it didn't hurt as much. So for anyone out there having problems remind yourself during the feed:

Other research I'd done about breastfeeding suggested that the positive mindset helped, but also having supportive people around me would make it easier so I invested in help from my mom and my husband. They both kept giving me glasses of water and encouraging words. Although it was my determination that really made the difference, they knew I wanted to successfully establish breastfeeding and so they helped my keep focussed on the good things that were happening.

To look after my nipples I took to not wearing a bra as often as possible to give them some air and stay dry. I'd found that my breast pads were keeping them moist between feed and that wasn't helping.